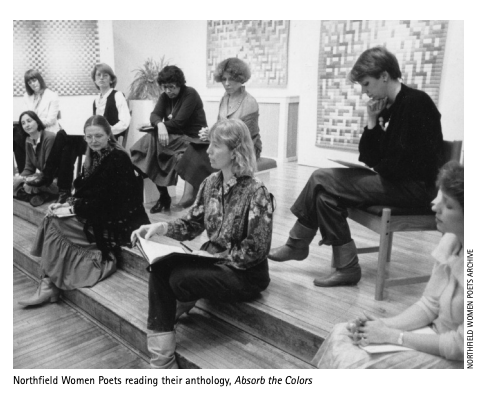 Northfield Women Poets (Penchant) was founded ca. 1970 by Karen Herseth Wee and Riki Kölbl Nelson. The group meets weekly during the academic year, and monthly during the summer, to read and critique each other's work. NWP has given numerous readings in Northfield and elsewhere, and has led poetry workshops at the Northfield Arts Guild. NWP/Penchant has published four anthologies of their work.

An asterisk indicates members who are current Northfield residents. As active members have moved away from Northfield, they have continued to return to Northfield for meetings of the group.

*Florence Chard Dacey has published four poetry collections: The Swoon, The Necklace, Maynard Went this Way, and Rock Worn by Water. She is the recipient of several regional arts council Artist Career Grants, a Loft-McKnight Award in poetry and a Pablo Neruda Poetry Prize. As a teaching artist, she led creative writing residencies and workshops across the state for thirty years.

Mary Moore Easter’s first poetry collection, The Body of the World was a finalist for the 2018 MN Book Award in Poetry. A Pushcart Prize-nominated poet and Cave Canem Fellow, Easter is widely published. She holds a B.A. from Sarah Lawrence and an M.A. from Goddard. A proud member of the Northfield Women Poets since 1983, she is represented in their four anthologies and by her chapbook, Walking From Origins (Heywood Press).  She has maintained her dance career, currently teaching dance-inspired writing for older adults for Aroha Philanthropies through TU Dance Company and School.  Founder and director of the dance program at Carleton College for decades, she also directed the program in African/Africa American Studies. Her new manuscript, Free Papers, was awarded MN State Arts Board support for research and performance preparation in 2019. Honors include The Loft Creative Non-Fiction Award; Ragdale and Anderson Center residencies; Bush Artist Fellowship in Choreography; a Minnesota Dance Alliance McKnight Fellowship in Choreography; and from Intermedia Arts, a Diverse Visions Video award and a McKnight Artist Fellowship for Interdisciplinary Artists. Easter is mother of two daughters raised in Northfield and four grandchildren.

*Toni Easterson found a new home with Penchant, Northfield Women Poets, after moving to Northfield from Connecticut, where she regularly wrote op-eds for the Hartford Courant. Having had her poems published in many different books and collections, she has also been active at the Northfield Arts Guild, where she served on the board of directors, Northfield Land Team and Green Team.  She has taught, tutored and mentored through the Northfield School System and CRC. As a textile artist she has taught many students to sew and knit. Her poem, The 19th Letter, was the first poem chosen to be in Northfield's new Poetry Post; two of her poems grace Northfield sidewalks.

*Andrea Een is a poet, professional musician, and retired professor of music, having taught violin, viola, Hardanger fiddle and chamber music at St. Olaf College from 1977-2012.  She was named a Master Folk Artist by the Minnesota State Arts Board and has composed more than 20 marches, dances, and listening tunes for Hardanger fiddle. She received the St. Olaf Medal from the Norwegian Government for her support of Norwegian folk music in the United States. Een often combines her poetry and her fiddle compositions in concert, most recently at the Northfield Public Library, April 2018. She was a winner in the Mark My Words Again contest at the Pump House in La Crosse, WI, and in the Art and Poetry Contest at Crossings/Carnegie in Zumbrota, MN. Een has poems in all four anthologies of Penchant and has published a chapbook Some Days We Name It Love.

*Marie Vogl Gery has published poetry and prose in Sing Heavenly Muse, The English Journal, Iowa Women, and others.  A member of Penchant/ Northfield Women Poets, she is one of the poets in these anthologies: A Rich Salt Place, Absorb the Colors, Tremors, Vibrations, Enough to Rearrange the World, & Penchant.  Her chapbook, Almost Invisible Names, carries much of the history of her family.  During 1980-81, she participated in the The Loft Mentor Series.  Later she was awarded a Minnesota Arts Board Grant, and was one of eight arts teachers chosen for a fellowship with AAE at the Kennedy Center in DC.  She has conducted classes and workshops focusing on writing locally and elsewhere.

Sigi Leonhard is the author of the novel Stimmen, the chapbook When You Fall Asleep, and poems published in Hunger Mountain, Absorb the Colors, A Rich Salt Place, Tremors Vibrations Enough to Change the World, and Penchant. She has been part of the Northfield women writers group for thirty-some years. Her play “Truth Serum” received a staged reading at the Minneapolis Playwrights Center in 2018. A professor at Carleton College, she has published on Goethe, Christa Wolf, Ingeborg Bachmann, Monika Maron and East German film.

JoAnne Makela has published poetry in literary journals (Water Stone Review, RagMag, and Poetry Motel) and in the juried photography/poetry collaboration Open to Interpretation: Water’s Edge (2012). She has a chapbook titled “Sidedoor” (Black Hat Press), and her work is in the anthologies of the Northfield Women Poets/Penchant, of which she has been a member since 1990. She specializes in writing for and about the arts and creates content for educational publishing. She's worked for arts nonprofits, for an art supply store, and in higher education, mostly doing things that manage programs and people and how they communicate with each other. She is a former program director of the Northfield Arts Guild.

*Jane Taylor McDonnell is the author of a memoir, News From the Border, which won the Minnesota Nonfiction Book Award and was translated into German, Italian and Portuguese. She also published Living to Tell the Tale; A Guide to Writing Memoir and a poetry collection, A Bone in the Throat. She has taught writing classes at Carleton and in the Northfield Elder Collegium. Poetry is her first love (she won an Academy of American Poets college poetry award), but for a long time she got distracted by teaching, advocacy for people with Autism, photography, raising children, gardening, etc. Being asked to join Penchant, she adds, was like being asked to come home.

*Riki Kölbl Nelson, co-founder of Northfield Women Poets with Karen Herseth Wee, is both poet and visual artist. Since the 1970s she and the writing group (now called Penchant) have initiated numerous art events in Northfield and the Twin Cities. In addition to Kölbl Nelson’s poems in Penchant's four anthologies, she has published a chapbook, The Fall Heart, and a bilingual collection of poems, Borders/Grenzen, with a postscript by Madeleine L'Engle. She has read her poems at her art openings in Austria and Germany, and in Minnesota venues, including The Loft in Minneapolis, Sub-Text in St. Paul, and Barnes and Noble in The Mall of America. She was co-chair for the Song and Poetry Conference in New York, sponsored by Alice Parker. She continues to write, teach, and exhibit, most recently as one of seven founding artists at the Northfield Arts Guild.

Karen Sandberg has studied with Jericho Brown, Joan Kane, Deborah Keenan, Thomas R. Smith and has published in Main Street Rag, South Dakota Review, Vita Brevis, Freshwater Journal and Penchant.  She has been a member of Penchant/Northfield Women Poets since 2000.

In the 1970s *Karen Herseth Wee and Riki Kölbl Nelson co-founded the writing group Northfield Women Poets, a dozen or so Northfield area women who met weekly to critique each other's work and to write.  To this day they still meet each week.  Now called Penchant, the group has done hundreds of readings, taught writing workshops, authored four anthologies, published individual chapbooks, and encouraged each member's individual writing achievements.  Herseth Wee's publications include poems in the group's four anthologies, plus her own book of poems, The Book of Hearts (1994 finalist for the Minnesota Book Award in poetry), a chapbook Before Language, and Baksheesh, a travel memoir of an international study trip she and her husband undertook with thirty St. Olaf students around the world in 1986, teaching them to observe carefully and write their experience. Herseth Wee's poems have appeared in anthologies as early as 1974: The Anthology of New American Verse, The American Poetry Press, Atlanta, GA, and as recently as 2013: The Heart of All That Is: Reflections on Home, Holy Cow Press, and 2014: A Field Guide to Northfield, ed. Nancy Britten Soth. 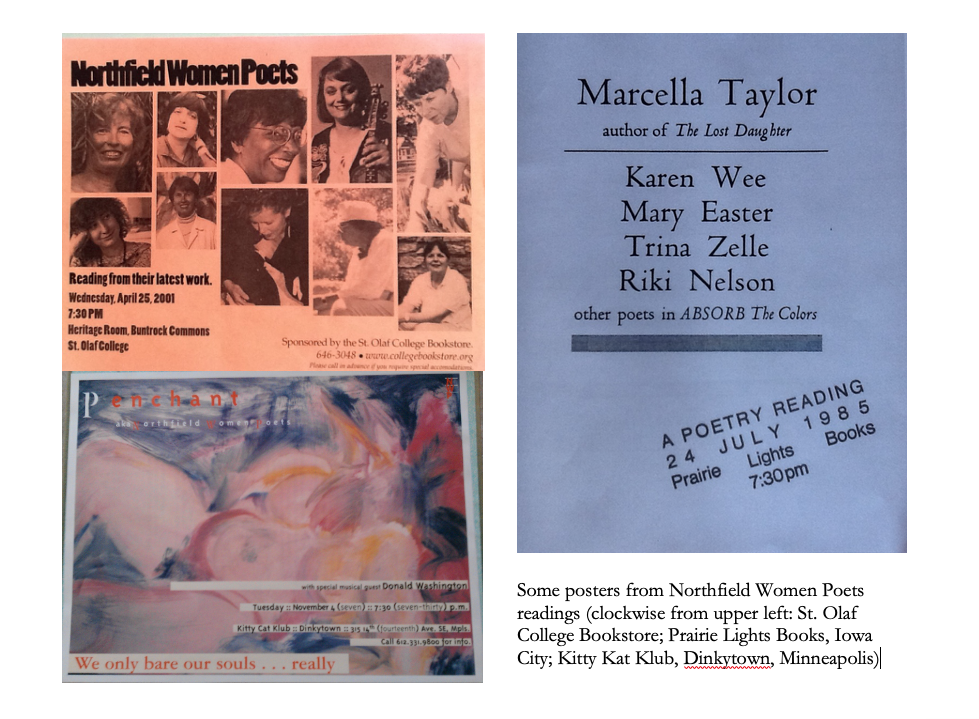 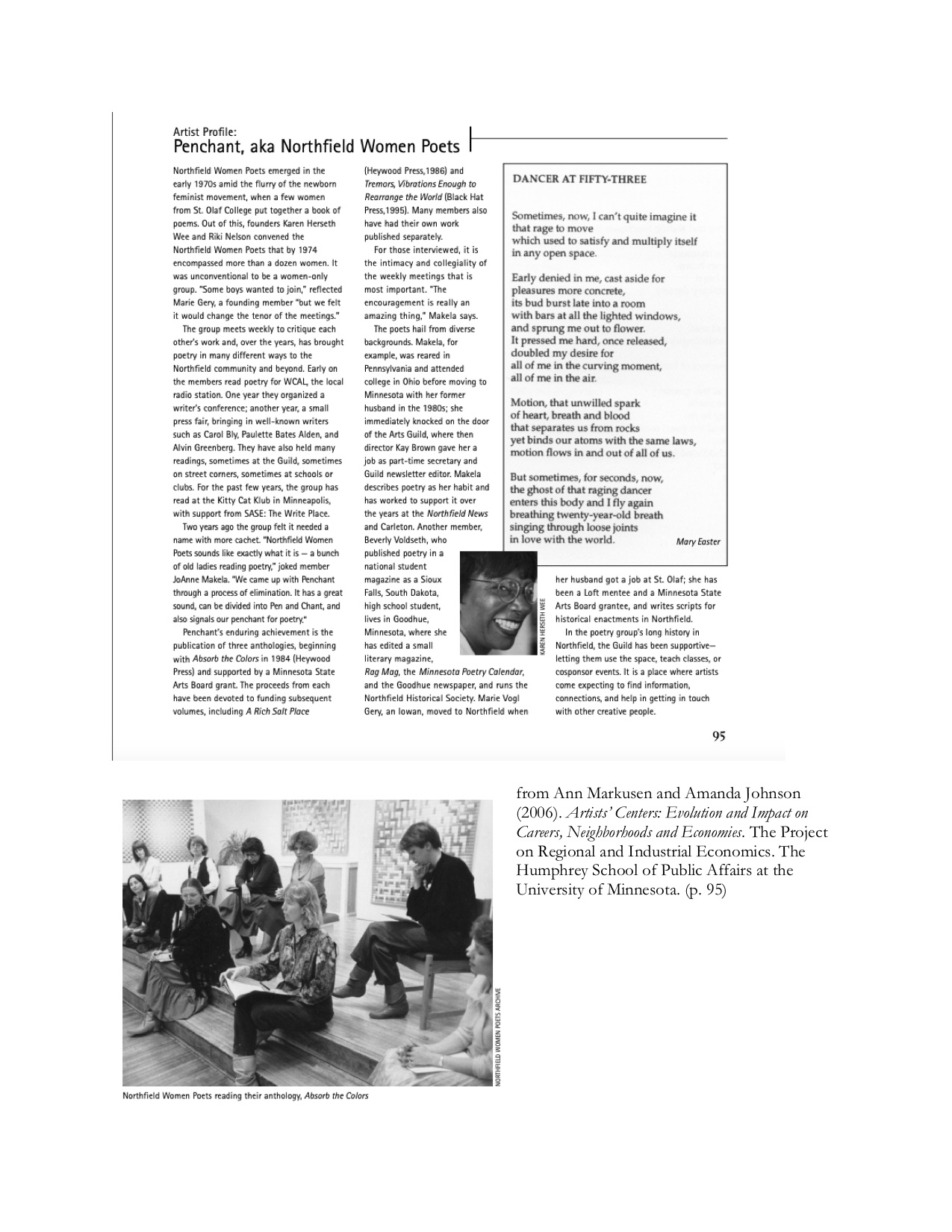 April 19, 1982.  Women in the Arts Festival, sponsored jointly by Carleton, St. Olaf, and the Northfield community.

November 10, 1985.  As the UCC prepared to be a sanctuary church for a Central American, Karen Herseth Wee introduced the poems and experience of Carolyn Forché in El Salvador at a morning meeting.

April 1994.  Karen Herseth Wee's Book of Hearts, a finalist in poetry for the Minnesota Book Award.

April 2018.  Mary Easter's The Body of the World, a Minnesota Book Award finalist.