The Library's history begins even before Northfield was a town! And during renovation workers have uncovered some intriguing objects. What are they? Where did they come from? When were they placed there? What was here before the Carnegie library?

Read all about it. 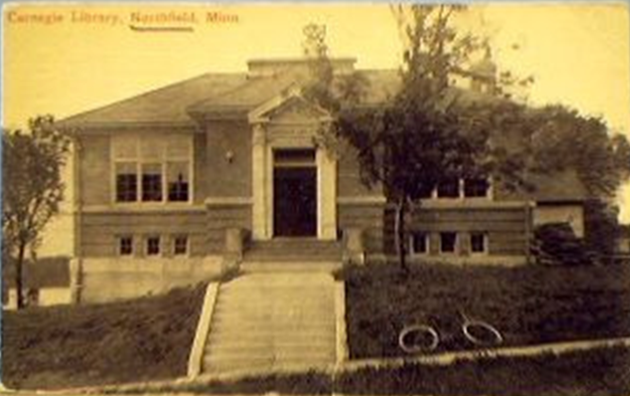 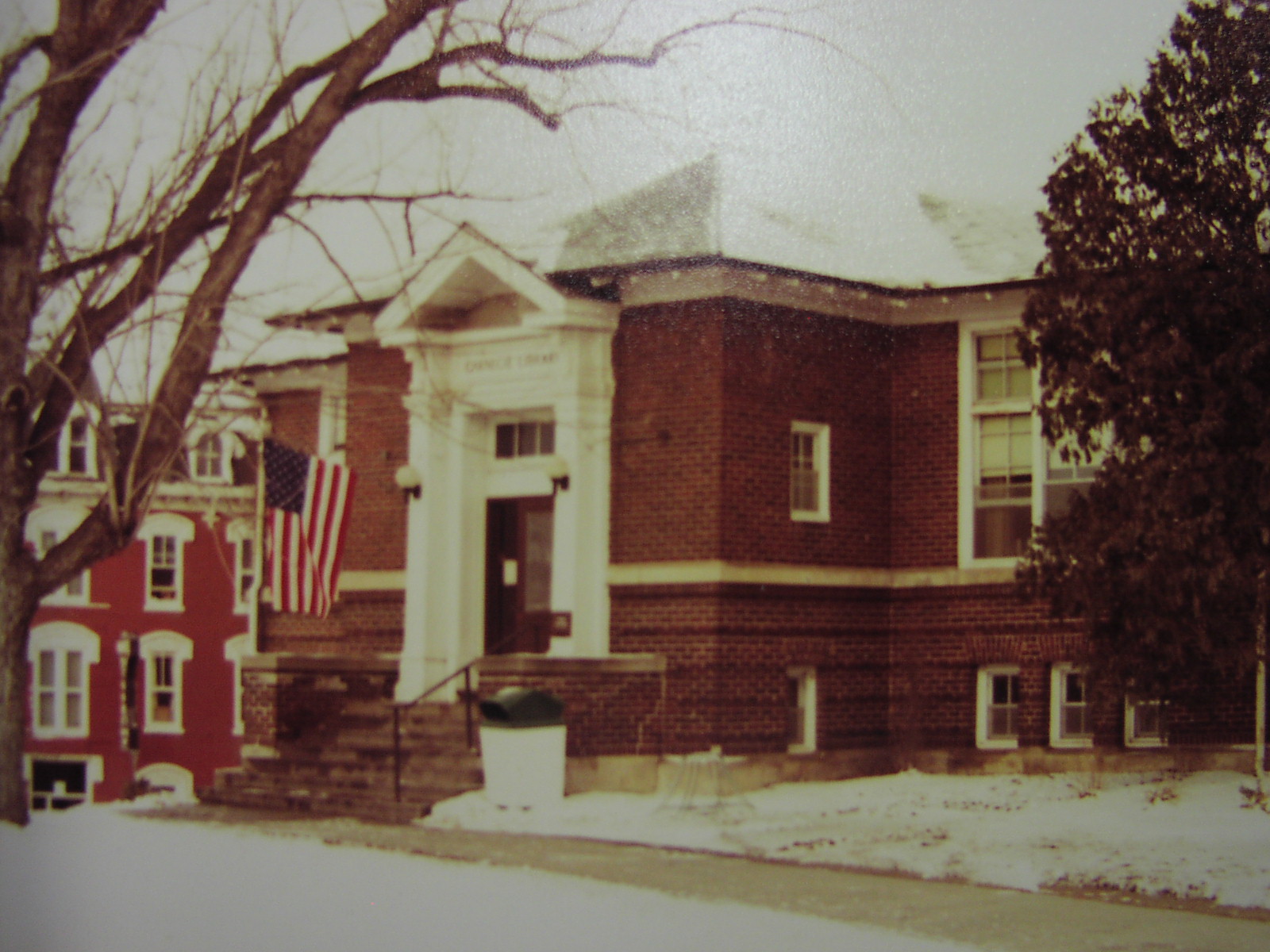 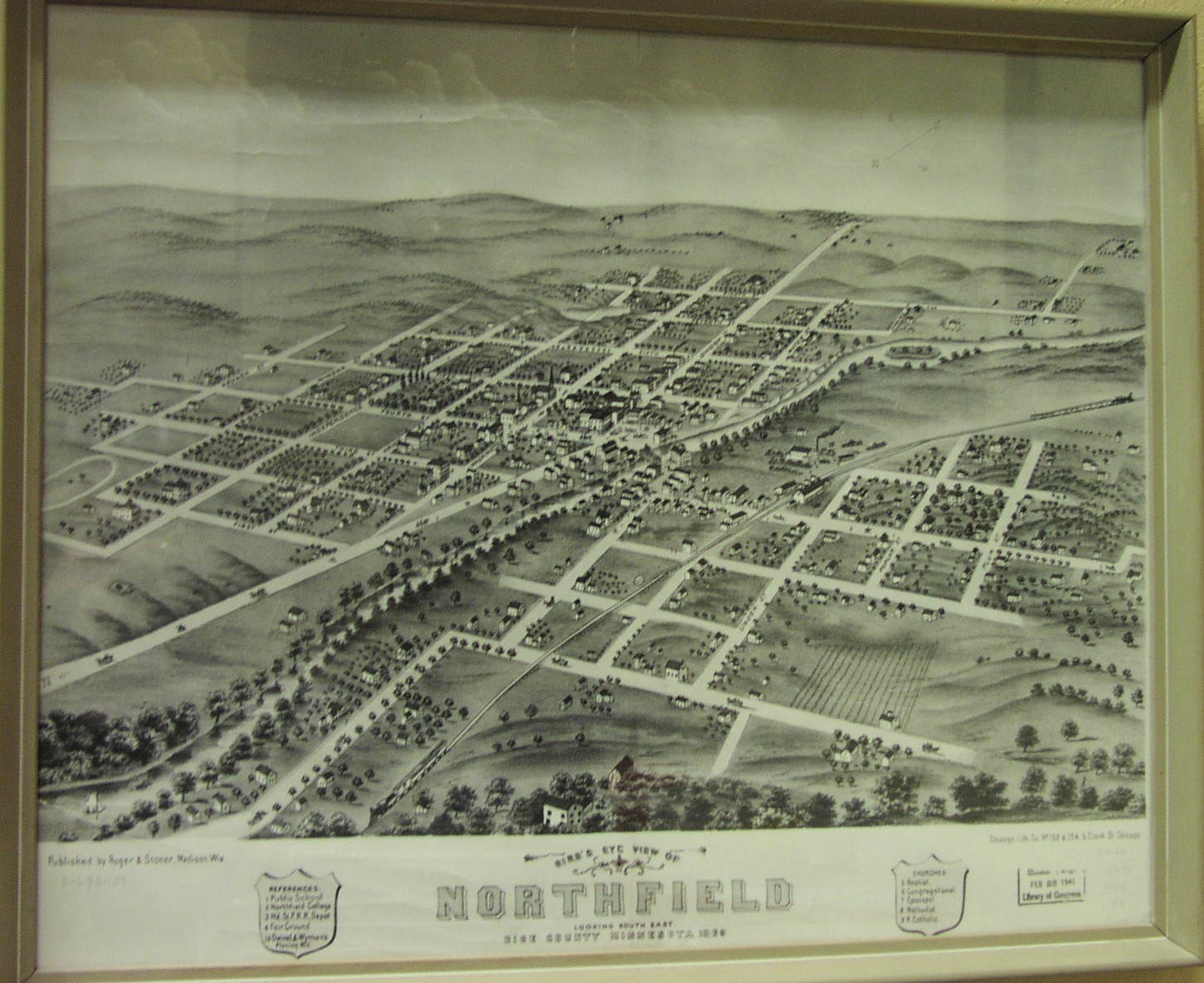 All of these prints are in the Northfield Public Library's art collection. 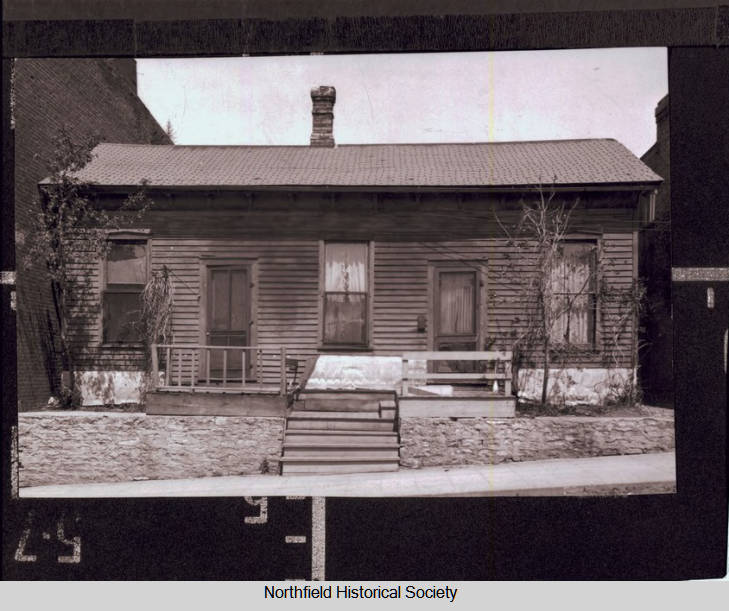 · 1898: After 6 years of rejection the City Council approves a 1/2 mill tax annually to support a public library

· 1910: The city opens the library promising to take care and staff it

Library is open 30 hours a week. For over 50 years one part-time librarian and volunteers staff the library

· From 1950 to 1970 the collection and circulation more than doubles, hours and  staff are increased

· 1983: The library moves to the old gym in City Hall as construction begins on a library expansion that opens in 1985

· 1985: Apple IIe personal computers are added to the library, catalog is on  microfiche

· 1990: The library catalog is now on-line and the library has 2 catalog computers

· 1995: Talk of expanding the library to fit the growing population of Northfield

· 1998: Booker, the Book Bus, is purchased by the Friends of the Library and the  summer family entertainment series, Books & Stars, is established

· 2005: A WiFi hotspot is established and more public use computers are added

·  2008: A $13 million addition is proposed but the economy goes into recessioni hotspot is established and more public use computers are added

· 2014: Planning for the current library renovation and expansion begins

· July 2015: The library moves temporarily to City Hall again – this time into a  former training room and office space

When you begin excavating a building site you never know what you will find! Construction crews digging footings and pipelines for the 2015-6 Northfield library renovation have found some interesting items. Take a look at the library lot on the Sanborn Insurance Maps for the years 1884-1930 and you will see many changes. Various buildings, roads and rails have been moved since Northfield was incorporated in 1868.  In 1908, a structure owned by H.T. Budd, and listed as a store building, was moved from the current library site to make room for the new Carnegie Library. Present day construction workers surmise that most of the items they’ve found are from fill added to the site at the time of the 1909 construction.

Items found thus far – and pictured below -  include bricks, a broken glass bowl or vase, a heavy piece of chain, as well as numerous animal bones from a cow, chicken, and a very large pig. Note that the glass has become iridescent from being buried underground. Read more about in the box below. 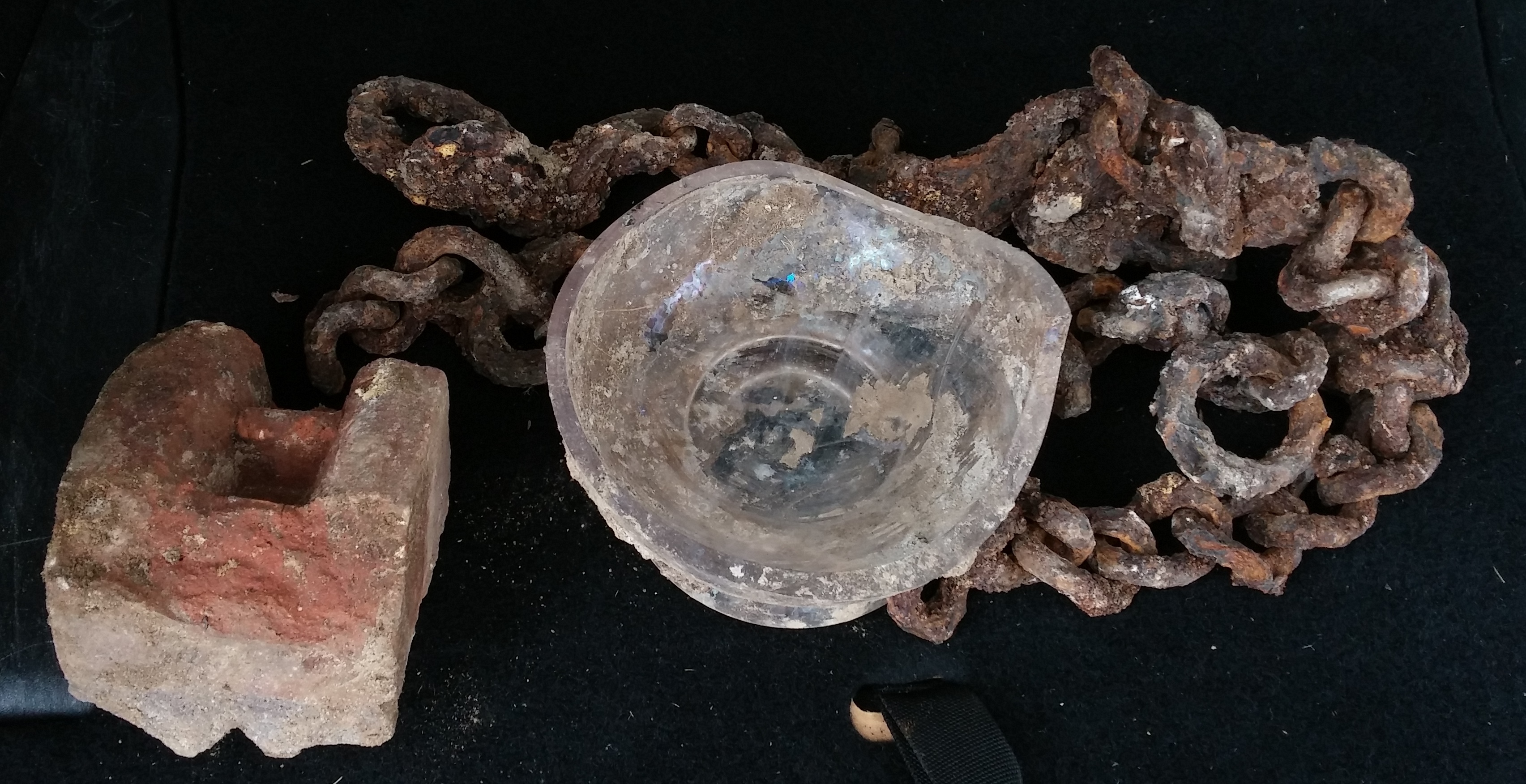 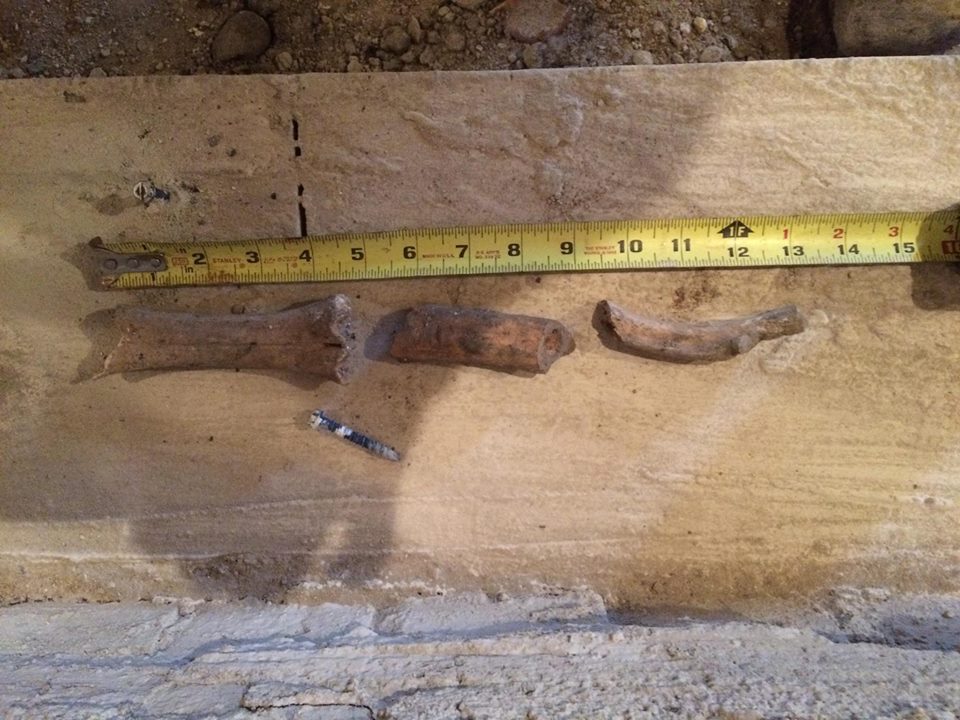 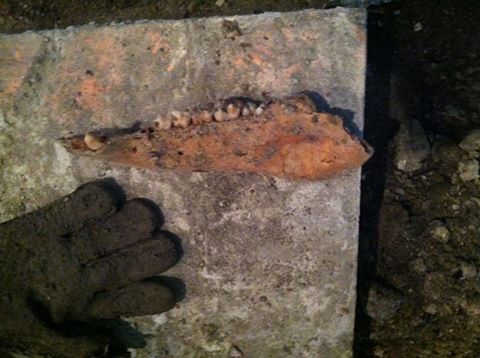 Earliest view of the library site 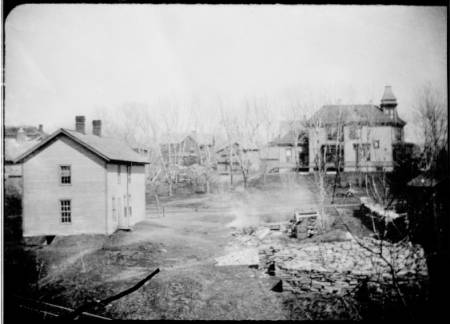 In the upper right of this photo you can see  “The Lord House”, currently home to the Reese family, on what is now 201 Third Street East.

The pile of debris in the lower right is likely the foundation of the Budd building that was moved to make way for the Carnegie Library built in 1908.

The building in the left foreground is “Pancake Hall”, which was torn down in 1930. (This photo is mislabeled, the location is the very north end of Washington Street before 1910).

Photo courtesy of the Northfield Historical Society used with permission. 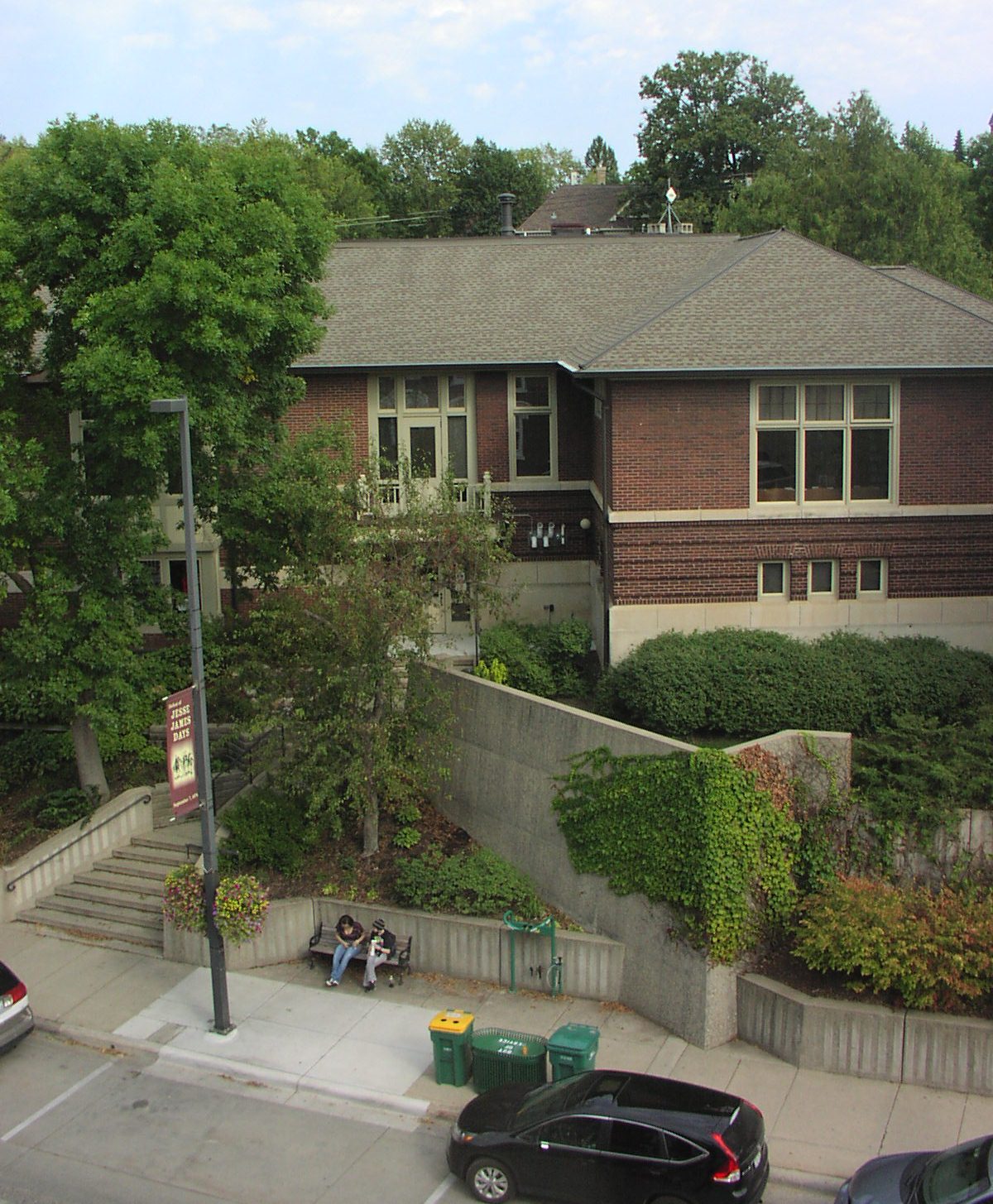 Almost the same view taken in 2014, you can see the Lord House on the upper right.

How does glass become iridescent when buried in the ground? 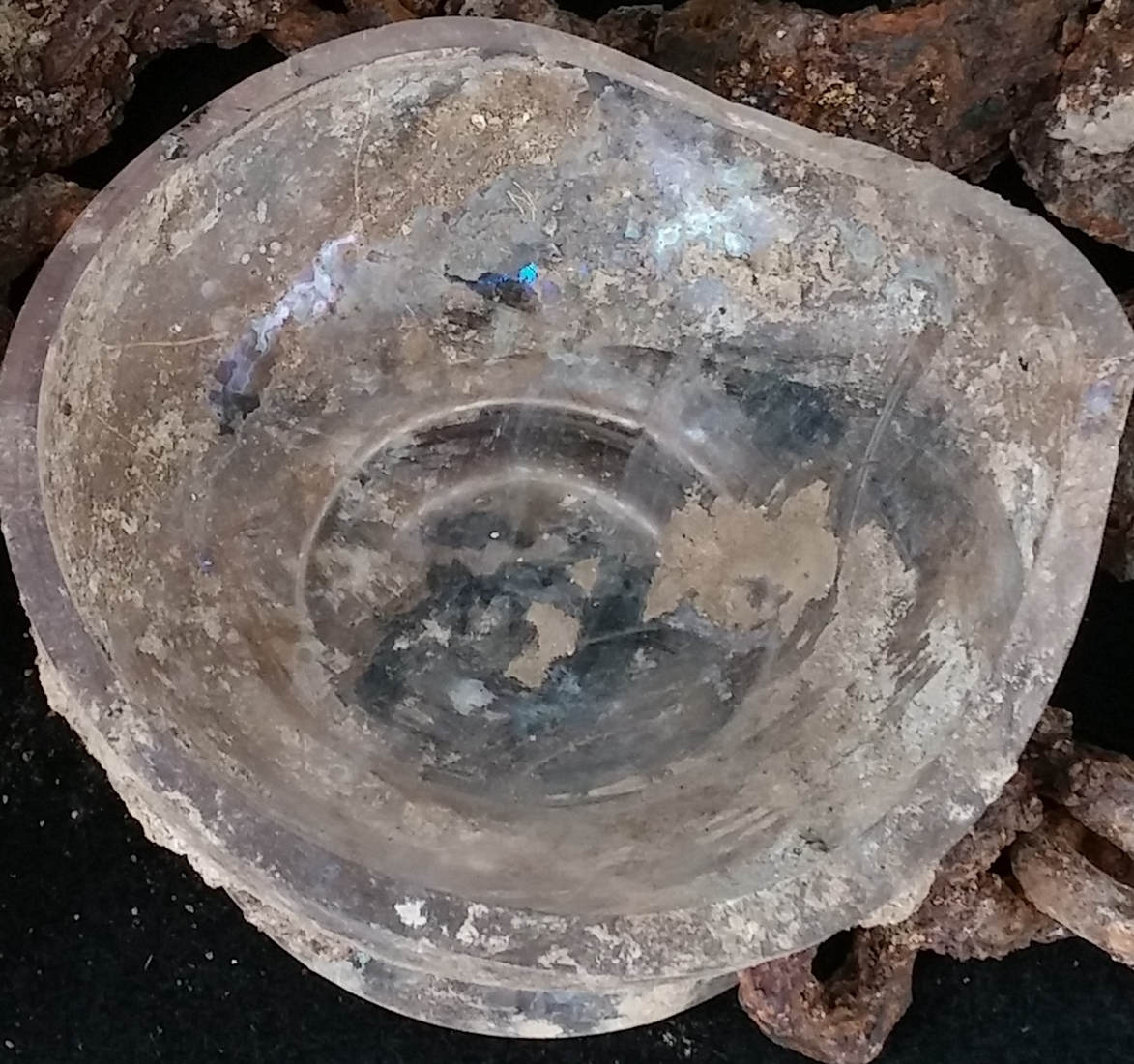 This is a sample of some of the ancient glass that features an exquisite, rainbow-like iridescence. This was not a deliberate effect, but an accident of time and chemistry. It occurred when a vessel was buried in soil that leached the alkali from the glass. The corroded layers flaked off, leaving a surface that reflected light in such a way as to cause iridescence. According to the Corning Museum of Glass;  In general, glass found in dry soils is in better condition than glass found in moist soils. This is because water is the primary cause of deterioration of glass. The exposure of glass to moisture causes alkali ions in the glass network to be slowly leached out and replaced by hydrogen ions from the water. This leached layer is referred to by several different terms: alkali-deficient layer, silica-rich layer, or hydrogen glass. It usually occurs within a few years of burial. Interestingly, it re-occurs in a cyclic manner, with additional layers being formed again, every few years. Distinct layers can often be seen, and as they build up, the weathering crust gets thicker and thicker. The final crust can vary in thickness from microscopically thin to so thick that it can easily be seen without a microscope.

If our bowl was left in the ground for many, many more years it could get this beautiful effect, but alas we dug it up! 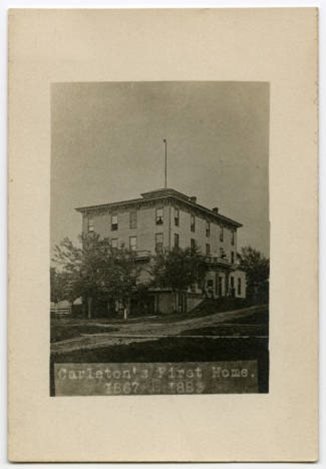 This is a photo of “The American House”, originally a hotel on the stagecoach trail in  Minnesota’s territorial times. This was the first hotel in Northfield when it was thought that Washington Street (not Division Street) would become “Main Street”.

The “American House” became the first iteration of Carleton College but was later turned into a woman’s hall. The building was eventually torn down and the “ Lord House” was built in its current Third Street location. 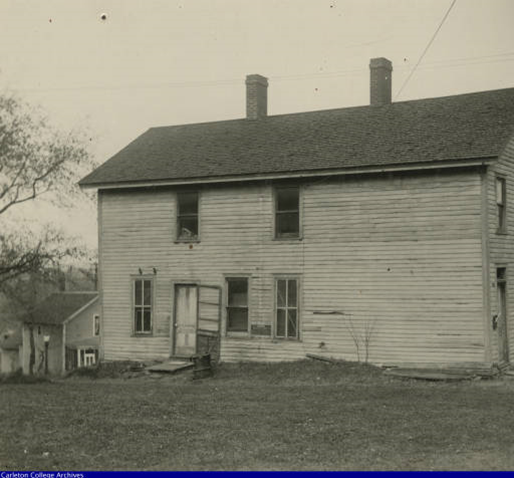 This building,  an off-campus Carleton men’s dormitory, was located just to the north of the library until 1930. It was called “Pancake Hall” because all of the dorm’s male residents were able to cook pancakes. This building was listed on Sanborn maps as early as 1884.

November 2015 The footings are in for the new atrium 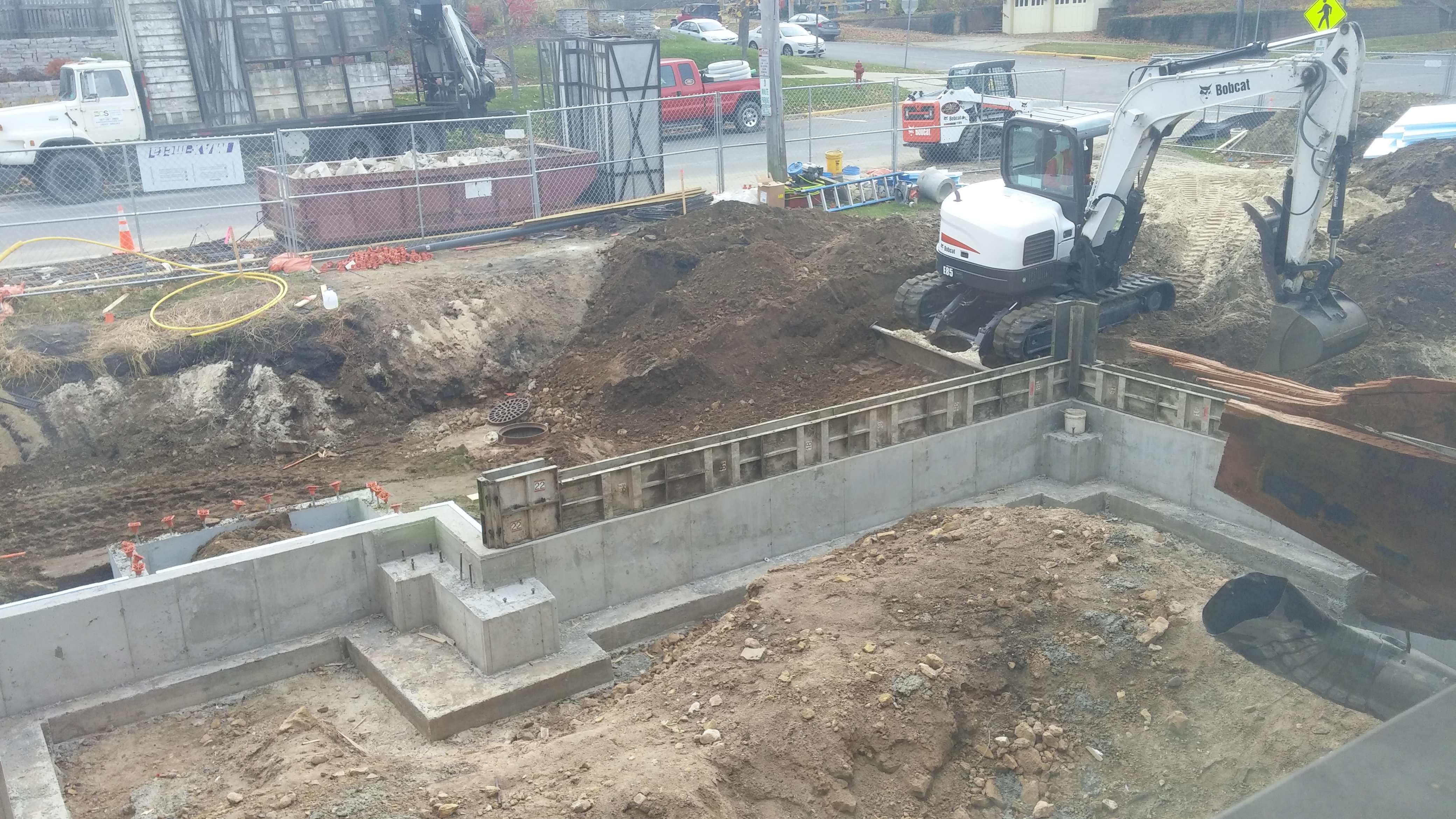 The frames are ready for windows 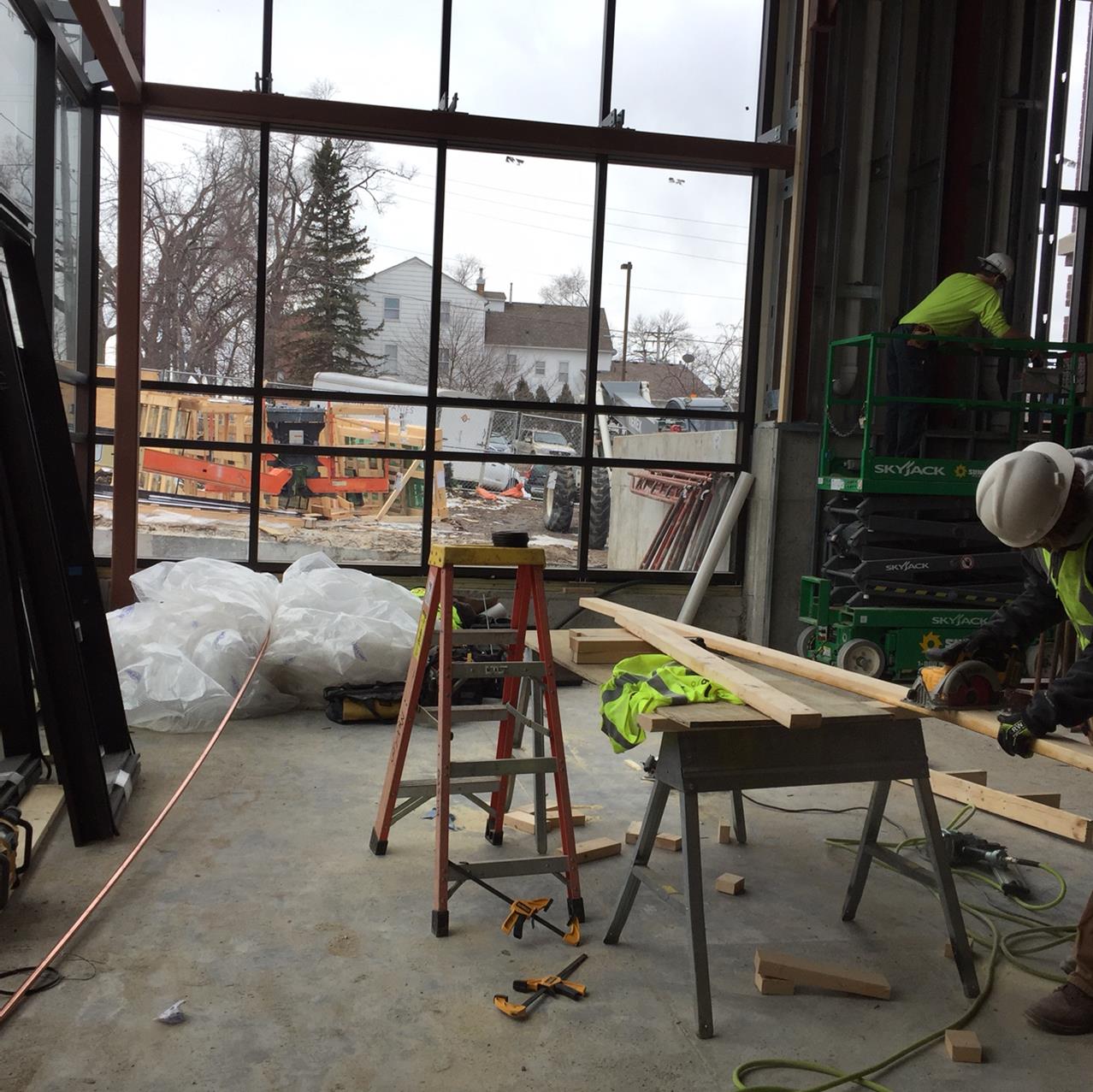 The terrazzo floor is going in 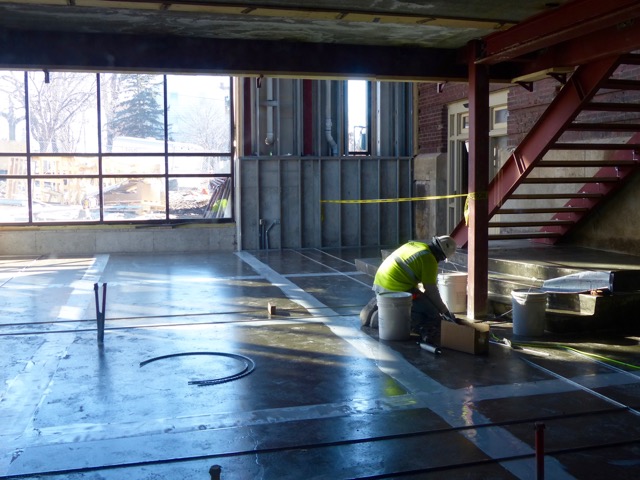 View from the lower level looking up to the mezzanine 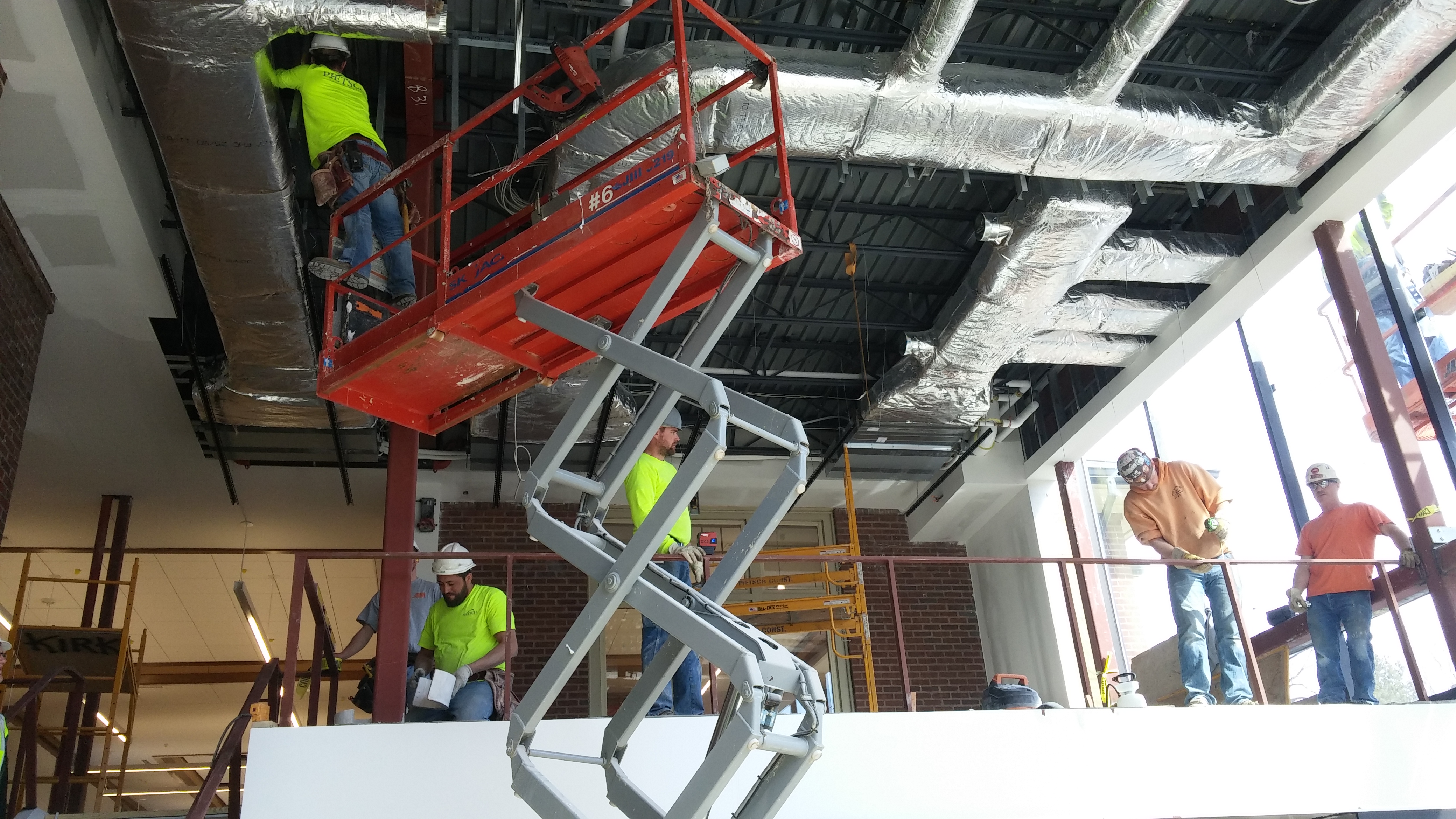 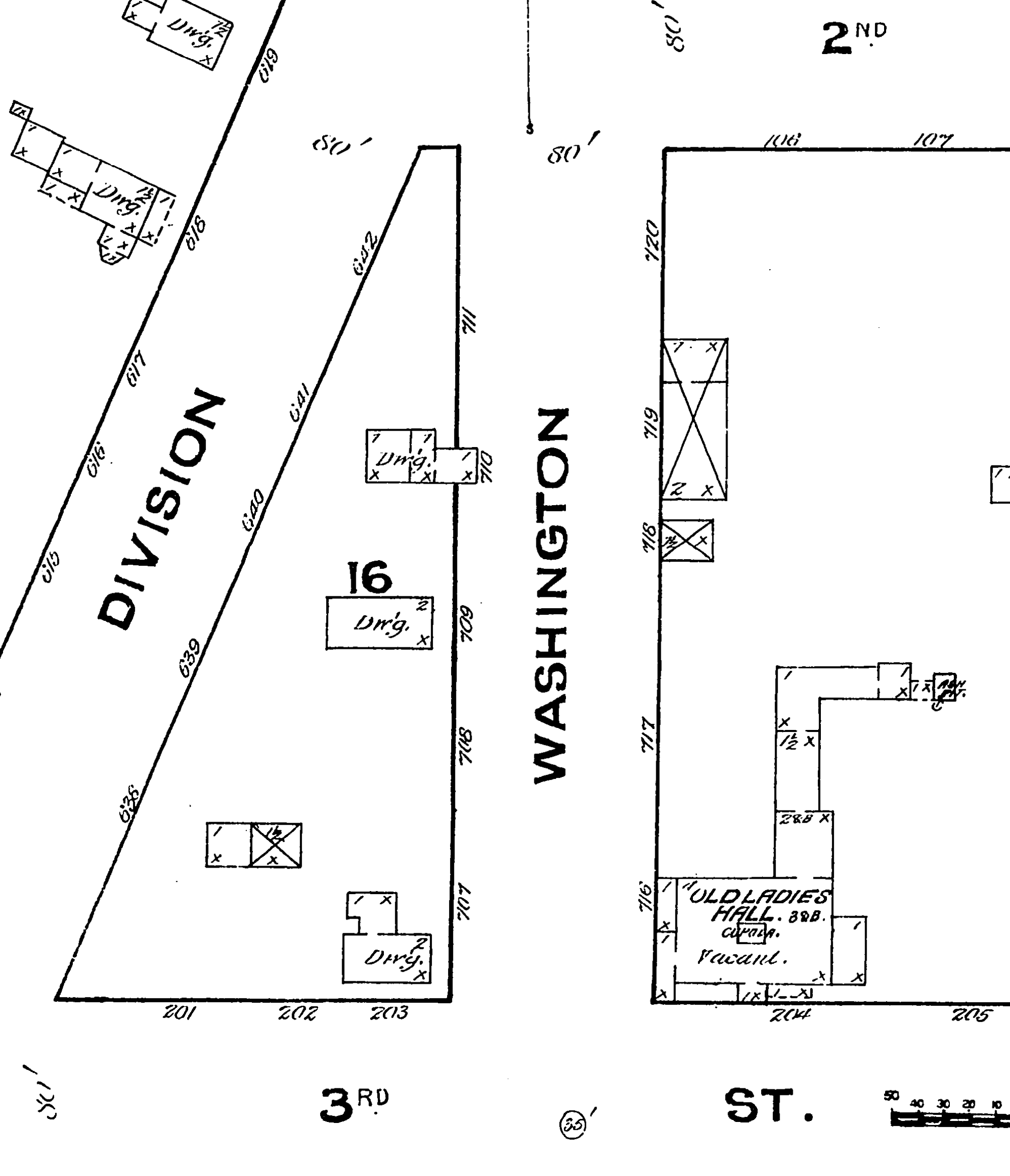 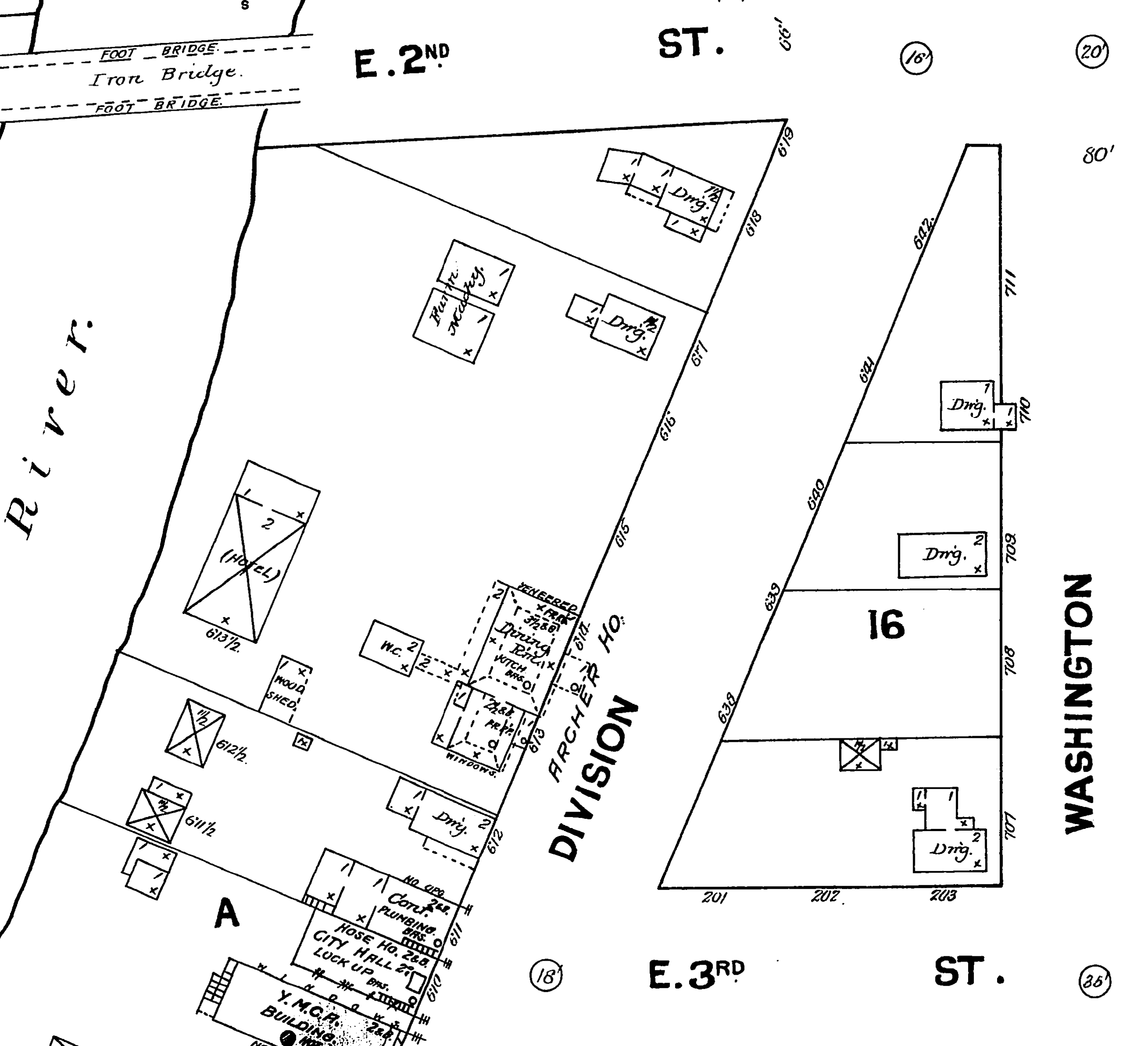 Note that there is now a 2nd Street bridge and one of the structures has been moved to make way. 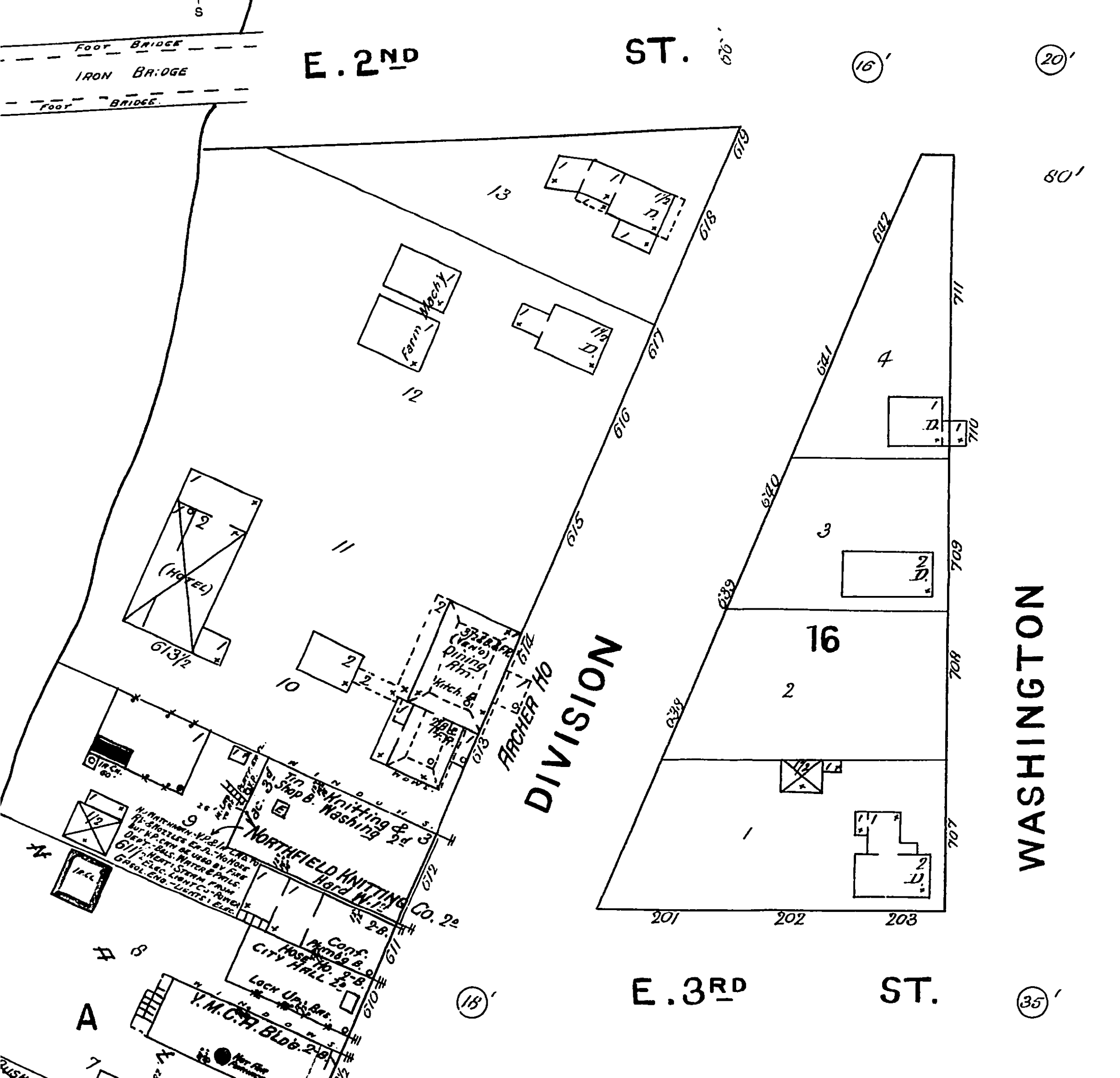 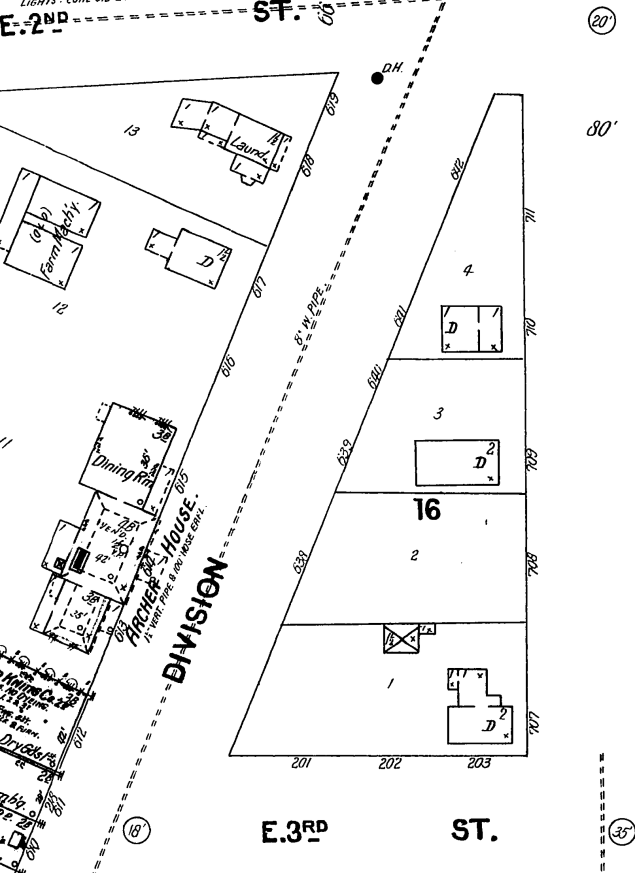 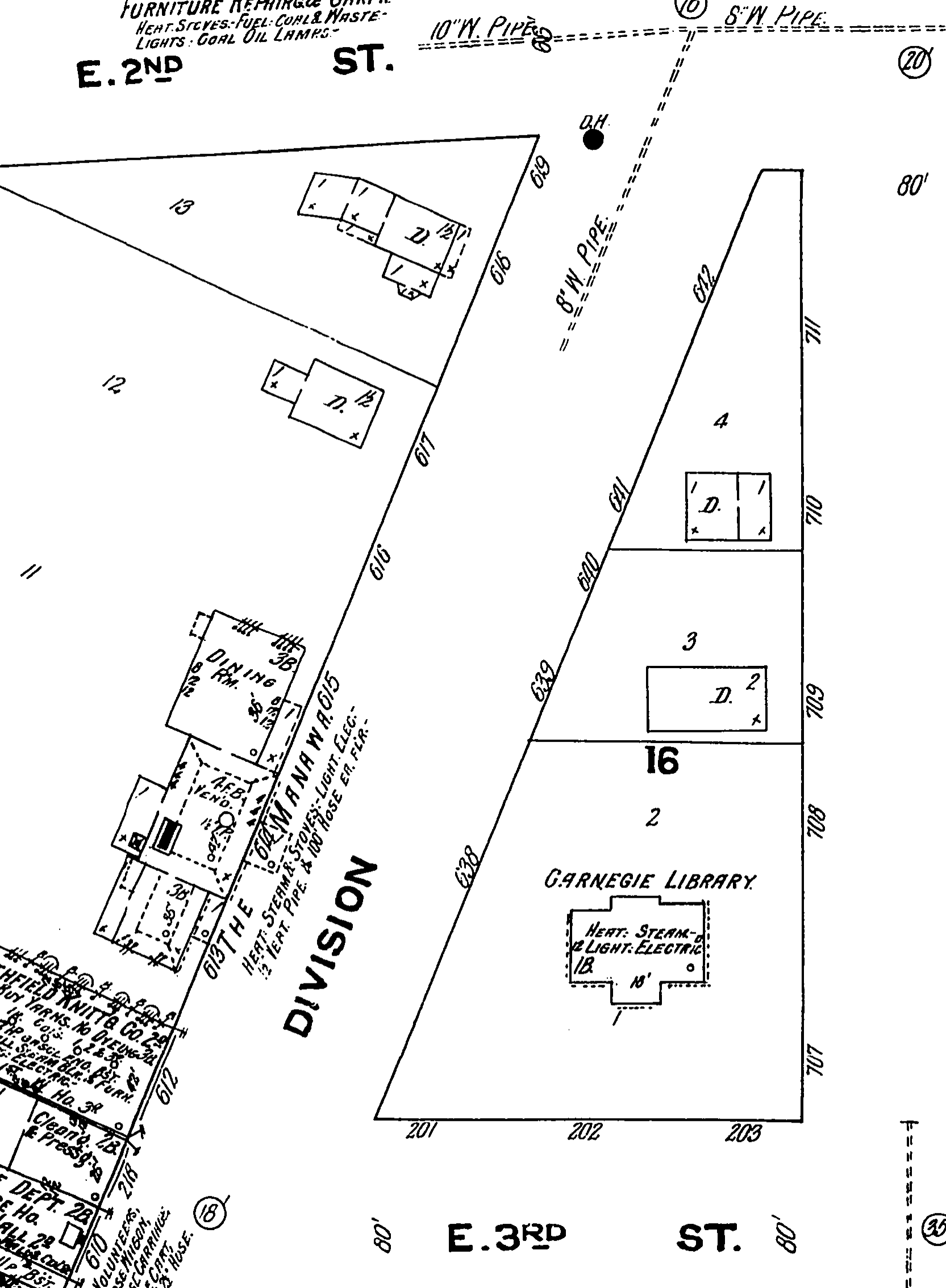 1930 Sanborn map-library has small addition on the back. 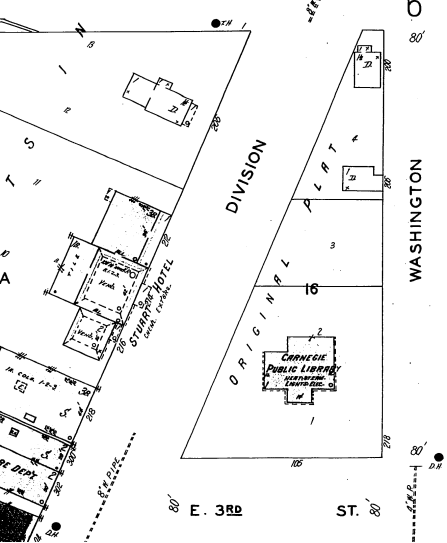